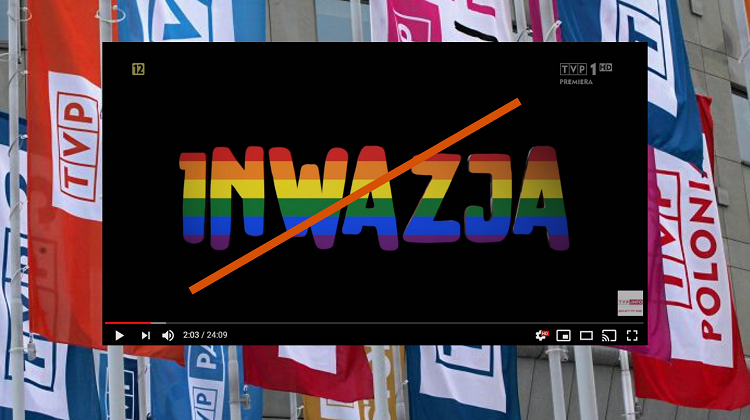 The Court ordered TVP to take “Invasion down from Youtube. Another success of KPH!

As a result of the intervention of Campaign against Homophobia (KPH), the District Court in Warsaw issued an injunction in which it compels TVP to remove “Invasion” from Youtube. It is a great success of KPH and Jakub Turski, an attorney who represents us and whose efforts have caused this homophobic and socially harmful libel to be taken off of the Internet – comments on the Court’s decision Slava Melnyk, the Executive Director of KPH. There are other actions against TVP already in the works and therefore, KPH starts raising funds with the “Fundraiser: Equality Invasion of TVP”.

On October 10, right after the Evening News segment and just before the match of the Polish national football team, TVP broadcast “Invasion” – a slanderous piece defaming the LGBT community. The Polish National Television channel used this menacing material to present viewers with 30 minutes of manipulations, half-truths and distorted interpretations, all of which was illustrated with snapshots of Pride marches, including close-ups of faces of their participants and with material collected by a woman sent to KPH to record operations of our organization on a hidden camera.

Campaign against Homophobia took prompt measures to stop the “Invasion” from appearing on the Internet.  In the cease and desist letter drawn up by Jakub Turski, the attorney representing KPH, TVP was called upon to: cease the violation of personal rights of KPH, i.e. to take “Invasion” off of Youtube and not to broadcast it in any form, to publish an official apology on the prime time Evening News and to pay PLN 10,000 to the benefit of the Helpline operated by Lambda Warsaw or to broadcast “Stoję po stronie młodzieży” (I root for the Youth) spot. The letter was left unanswered by the Polish National Television network and the action against TVP was brought to the District Court in Warsaw.

The Court decides: “Invasion” must go

It is a great success of KPH and Jakub Turski, the attorney who represents us and whose efforts have caused this homophobic and socially harmful libel to be taken off of the Internet – comments on the Court’s decision Slava Melnyk, the Executive Director of KPH.

Equality Invasion of TVP – fundraiser for any subsequent actions against TVP

Apart from Campaign against Homophobia, “Invasion” featured faces or statements of seven persons whose safety – due to the hateful nature of the material – has been compromised. All these persons would like to bring an action at law to seek justice.

I want to defend my name in court because I will not let a government run TV station lie to the Polish society with impunity and attack persons who fight every day for respect and dignity of LGBT people – says Magdalena Świder, one of the persons whose statement was featured in “Invasion”.

A court battle for equality in these eight suits will cost approx. PLN 35,000. Due to high costs of these court proceedings we are launching the “Equality Invasion of TVP” fundraiser on Facebook to collect the sum required jointly with others and show that there is no social consent to homophobia on the public television – informs Slava Melnyk, the Executive Director of KPH. You can also donate money by a bank transfer to our organization’s bank account entitling it “Darowizna: Inwazja równości na TVP” with the following number: 35 2130 0004 2001 0344 2274 0001.

All funds so raised shall be used for covering the costs of court proceedings, including court fees on actions, postage of letters in the course of the proceedings, costs of legal coordination of eight actions and securing funds for a possible defeat in court which we do not assume, but which we have to account for – lists Karolina Gierdal, KPH’s lawyer. If we win, any unused funds shall be designated for other actions brought to court by the Legal Group of Campaign against Homophobia and for strategic litigations the aim of which is to implement equality in Poland.