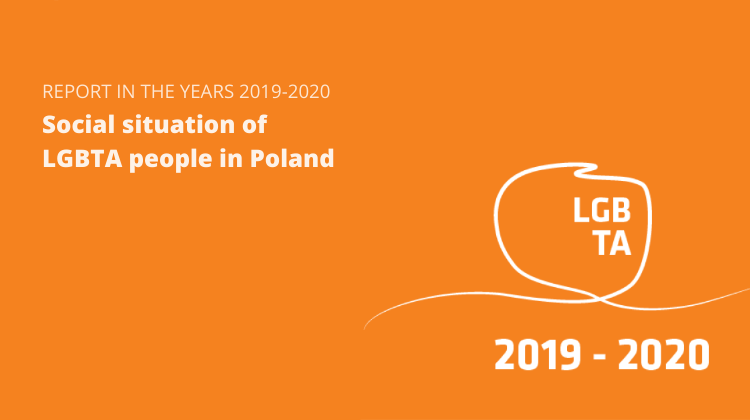 Polish government’s policies are ruining the lives of LGBT+ people: we are publishing the Report on the social situation of LGBTA people in Poland in the years 2019-2020.

The ever-thickening aura of homophobia and transphobia, rising scale of aggression and strengthening experiences of depression and suicidal thoughts are just some of the factors that lead LGBT+ people to consider leaving Poland. The Report on the social situation of LGBTA people in Poland in the years 2019-2020 illustrated the disastrous image of the reality and the perspectives of the non-heteronormative persons in the country. The 6th edition of the study, was conducted for the second time by the scientists from the Centre for Research on Prejudice at the University of Warsaw, as commissioned by the Campaign Against Homophobia and the Lambda Warszawa  Association. The experiences of almost 23 000 participants of the study demonstrate a collapse in the previous trend of rising acceptance and improving situation of LGBT+ people.

The newest report from the study “The social situation of LGBTA people in Poland” provides unequivocal evidence for the negative changes the LGBTA people in Poland have been facing.  In the 6th edition of the study almost 23 000 participants answered more than 300 questions in an online survey prepared by the scientists from the University of Warsaw.

In just a few years, the previous positive trend of rising acceptance has been completely overturned by the widespread, aggressive homo- and transphobic propaganda. The observed changes are a devastating consequence of the public bashing of LGBTA people by right-wing politicians during the last electoral campaign, assisted by radical fundamentalist organisations and the clergy. The current situation is especially affecting the youngest members of the LGBT+ community, who cannot count on acceptance of their gender identity or sexual orientation- neither from their families, nor from the university staff or employers. As a result, we are more frequently facing depression, violence and exclusion that make it significantly harder to function in any given environment. The conclusions drawn from our report illustrate the catastrophic regress that occurred in Polish society resulting from the hate campaign against LGBTA people, piloted by the government- explains Mirosława Makuchowska, the vice-president of Campaign Against Homophobia.

The hate campaign is taking its toll – every second LGBTA person in Poland is experiencing serious symptoms of depression.

The number of LGBT+ people who declare they experience serious symptoms of depression rose by more than a half. Currently almost every second survey participant (44%) has been affected by such symptoms, compared to 28% in 2017. More than half of the participants (55%) declared that they have experienced suicidal ideation (a rise from 45% observed on 2017 and 38% in 2012). This phenomenon is especially strongly manifested in participants who live in the so-called “LGBT-free zones”. 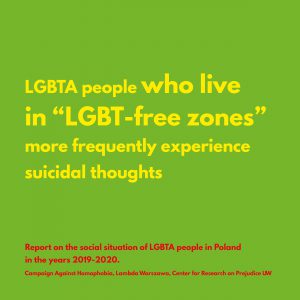 Less support from the family and more fears related to coming-out.

The hate campaign targeting non-heteronormative people makes their families less likely to support them. Disturbingly, 37% of the participants have not come out to any member of their family (rise from 33% in 2017). Just 55% of mothers and 40% of fathers know about the non-heteronormative identities of their children. A similar same percentage applies to siblings (53% of sisters and 43% of brothers). LGBTA people mainly seek refuge with their friends- just 5% of the participants have not disclosed their sexual orientation or gender identity to them (no change compared to 2017). 25% of the participants consider not coming out at work a safer option than outing themselves. At the same time the level of acceptance of parents for the sexual orientation/gender identity of their LGBTA children decreased. 61% of mothers, who are aware of the non-heteronormative identity of their child, accept them (a decrease from 68% in 2017). The percentage is even lower among fathers- 54% (a decrease from 59% in 2017).

Investigations into the public opinion show that in the last years the negative attitudes towards LGBT+ people have become more widespread. The media are filled with stereotypes and homophobia. Even more significantly, people who are considered authorities in the society, such as figures of the Catholic Church and politicians are openly spreading hate. This atmosphere creates the extraordinarily depressing social reality that non-heteronormative people function in. The results of our study, which was conducted on almost 23 000 respondents show that open hate frequently leads to aggression and has a huge impact on almost every area of the lives of gay people, lesbians, bisexual and transgender people– summarises Dr Mikołaj Winiewski from the Centre for Research on Prejudice at the University of Warsaw.

We need to leave…

The situation in Poland is deeply changing the migration process among non-heteronormative people. Compared to the rest of the population, LGBT+ people more frequently choose to live in large cities, where they can feel relatively free. The participants are more frequently considering moving abroad- 12% of LGBT+ people (around 140 000 persons) are thinking about emigrating with every third citing discrimination experienced in the immediate environment as the reason. The migration trend contributes to the decreasing economical potential of the country, as an obvious result of the migration of valued specialists who possess qualifications otherwise deficient on the job market. 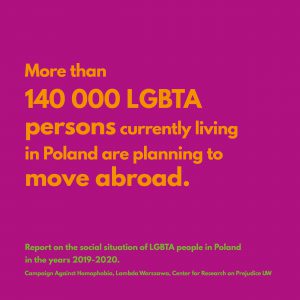 We are not waiting any longer! Marriage abroad is growing in popularity.

The living conditions in countries that are more accepting than Poland are important for the members of the LGBT community because of the possibility of formalising same-sex relationships. About 18 000 people living in Poland have gone abroad to enter a civil partnership or got married to the person of the same sex. If not for the financial obstacles, even 70% of LGBTA people in relationships would make their relationship legal (a rise from 62% in 2017). The percentage of people who would be willing to adopt a child, given the opportunity has also risen to 37% (from 32% in 2017). 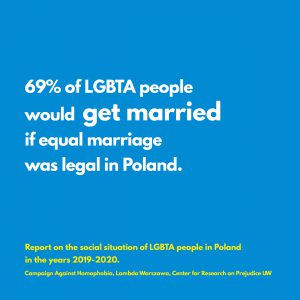 The rising hostility sparked by the campaign of hate has big implications on the rising reservations LGBT+ people have about state institutions. The levels of trust for the government, the parliament and the police are extremely low. The results of this study show that the participants have almost no trust in those institutions at all. Those reservations are accompanied by the rise in levels of trust for LGBTQIA organisations, other non-governmental organisations and for the European Union. In the study, the members of our community declared that they mostly vote for the political parties and candidates who support the postulates concerning equality of LGBT+ people- explains Krzysztof Kliszczyński from the Lambda Warszawa Association.

Deteriorating trust in the state.

The lack of trust in the state can be clearly seen in the strong aversion of LGBT+ people to reporting crime. The participants reported only 2.5% of crimes to which they fell victim. The very low level of reporting to the Police stems from the lack of trust in the effectiveness of this formation (51%) and the lack of trust that reports will be taken seriously (35%). This aversion often is an effect of previous bad experiences, since the officers often ignore the cases and try to convince the victims not to file official reports.

The coronavirus pandemic affected the scale and sort of experienced violence.

The results of the study have been affected by the ongoing COVID-19 pandemic, which made it cautiously interpret the observed phenomena and differentiate between the current situation and the previous findings. The most significant pandemic-related problems reported by the members of the LGBT+ community include job loss or the reduction of working hours, resulting in a decrease or loss of income and the deterioration of mental wellbeing. In the period of social isolation, triggered by the lockdown, the level of physical violence experienced by LGBT+ people in public spaces has decreased. Lack of mass events, marches and public gatherings caused a decrease in the number of acts of immediate violence towards non-heteronormative people. A similar trend could also be observed considering the rates of verbal violence, which decreased by 5% during the pandemic. However, 65% of LGBT+ youth still encountered such acts of violence. 26% of pupils and 25% of university students have experienced sexual violence, the prevalence of which is on the rise due to the ongoing pandemic. 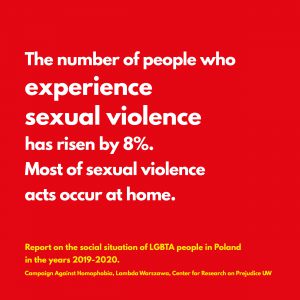 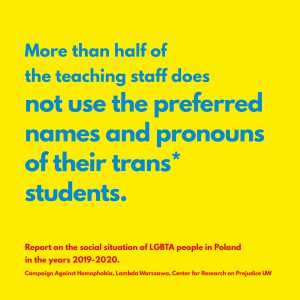 Throwing out of the house leads to homelessness.

The most recent study has for the first time investigated the problem of homelessness among LGBT+ people. Almost 17% of participants have experienced at least one episode of homelessness. The episode lasted up to a week for every second participant. In 10% of the cases, the crisis lasted longer than a year. Every tenth LGBTA person has been thrown out of their family home, 20% have run away themselves. The phenomenon of homelessness is most severely affecting young people- 26% of pupils and 18% of students have run away from home.

“Treating homosexuality” is still practiced by the specialists.

The still widespread conviction about “curing” non-heteronormativity depicted in the study proves to be a shocking ongoing issue LGBTA people face. Some of the participants admitted that they have been subject to pressure regarding change of their sexual orientation or gender identity. Such recommendations were made to them by psychologists, psychiatrists, therapists, school and university staff and members of the clergy. All in all every fifth gay man/lesbian have encountered unambiguous suggestions to change their sexual orientation or gender identity.

The study titled “The social situation of LGBTA people in Poland” was conducted in the form of an online questionnaire from December 2020 to the end of February 2021. 22 883 persons participated in the study, the predominant group being young people (67% of the participants were less than 25 years old). This is the biggest and most significant investigation into the situation of non-heteronormative people, which is being conducted around every 5 years, starting in 1994.