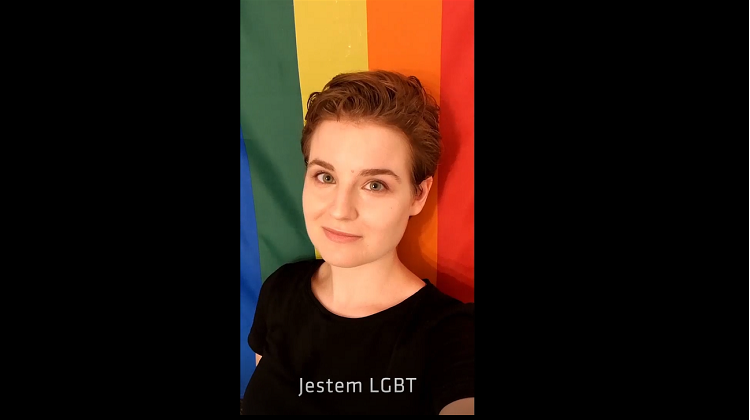 “I am LGBT – I am human” – you have to see this spot before the election.

Due to Andrzej Duda’s election campaign and conservative politicians saying, “The LGBT community are not people, they are ideologies,” June’s Pride Month turned into a festival of homophobic hatred. That’s the reason the Campaign Against Homophobia (KPH) recorded a spot in only 4 days, in which almost a half a thousand people from the LGBT community showed their face and each and every one of them declared their humanity. Through our spot we want to deal with the dehumanizing myth of a non-existent ideology once and for all, strengthen the LGBT community, and mobilize everyone and anyone to vote in the elections – says Cecylia Jakubczak from the Campaign Against Homophobia.

A heartfelt and touching spot from the Campaign Against Homophobia has just dropped on the media, in which nearly half a thousand people from the LGBT community all over Poland, while looking directly into the camera, declare “I am LGBT – I am human”. The spot is the KPH’s response to Andrzej Duda’s homophobic presidential campaign, which, together with other PiS politicians, dehumanizes the LGBT community by denying homosexual, bisexual, and transgender people. People identifying as LGBT are our flesh and blood– they are our brothers and sisters, neighbors, and coworkers. They are our beloved sons or daughters, our hairdressers that cut our hair every month, and the owners of our neighborhood store. They are our doctors who have been treating us for years, and our math teachers who taught us to count.

That’s why the KPH decided to put their entire spot on the basis of videos that the LGBT community prepared themselves on their phones. And right next to well-known members of the LGBT community, such as vocalist Michał Kwiatkowski, volleyball player Katarzyna Skorupa, Lao Che drummer Michał Dimon Jastrzębski, and activist Areta Szpura, there will be office workers, students, doctors, schoolchildren, and artists who together make up two million of the Polish population. There will, of course, be one thing connecting them: “I am LGBT– I am human.”

Through our spot we want to deal with the dehumanizing myth of a non-existent ideology once and for all, strengthen the LGBT community, and mobilize everyone and anyone to vote in the elections,” says Cecylia Jakubczak from the Campaign Against Homophobia. The video also hopes to mobilize as many people as possible to cast their vote in the upcoming elections which, thanks to their commitment and determination, have a chance of ending an era of homophobic and transphobic governmental rule in Poland.

The spot can be viewed on all social media and on the websites of the  Campaign Against Homophobia, its patrons and media patrons, as well as partner organizations.

A thank you goes out to all those who responded to our appeal and took part in the filming of “I am LGBT– I am human”.  You are all incredibly brave and strong people who deserve the utmost respect. At the same time, we have to apologize to the people whose videos were regrettably not included in the spot.