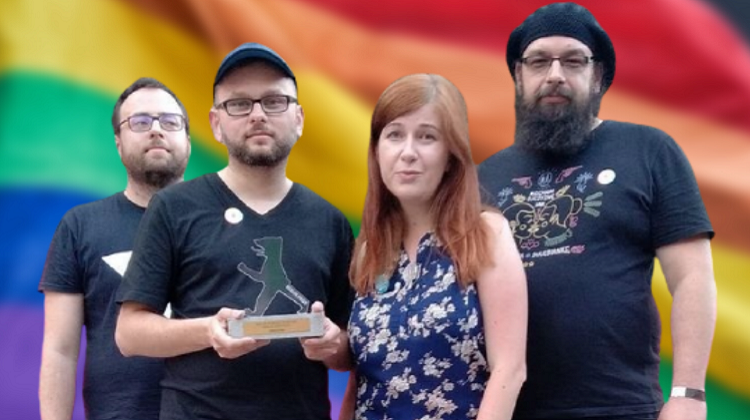 The Atlas of Hate due to appear in court. The first two hearings are set for July

The Atlas of Hate team will appear in court with slander lawsuits being directed at them by local government units that adopted “anti-LGBT Ideology” resolutions, or the Family Rights Charter. They stand to be liable for at least 165,000 PLN (over 36,000 EUR). The first hearing is due on July 20th in Ostrołęka, the next on July 29th in Nowy Sącz.

The Atlas of Hate team is made up of 4 people—Kuba Gawron, Kamil Maczuga, Paulina Pająk and Paweł Preneta. They met on the Internet, during a wave of local government adopting anti-LGBT resolutions to monitor their actions. Based on their monitoring, www.atlasnienawisci.pl was created. The Atlas of Hate’s map shows local administration units that adopt “anti-LGBT ideology” resolutions and/or the Family Rights Charter, as well as those that vote against said resolutions or back out of them. Thanks to the Atlas’ work, the whole world found out about local anti-LGBT legislation. The international community acted with pressure against the Polish government, calling for the Law and Justice government to abandon their radically homophobic direction. The European Parliament adopted two resolutions* concerning the LGBT community in Poland. Western sister cities have suspended cooperation with their Polish counterparts (including Saint-Jean-de-Braye and Illingen with Tuchów, Fermoy with nowa Dembia, Nieuweigen with Puławy, Schwerte with Nowy Sącz, the Central Lorraine region with the Lesser Poland voivodeship and Puurs with Dębica). The European Commissioner for Equality, Helena Dalli suspended a microgrant program for 6 partnerships with Polish Cities, while the operator for Norway Grants canceled their grant worth 8 mln euro for the Subcarpathian voivodeship. The Polish Civil Rights Ombudsman Adam Bodnar submitted 9 complaints against legislation targeting the LGBT community to administrative courts. Now Kuba, Kamil, Paulina and Paweł will face the judge for their human rights activism.

We started monitoring these discriminating resolutions, because we’ve noticed that they are far wider-spread than what the media described. I believe they are a symptom of a crisis in local democracy: local governments should build communities based on respect and solidarity, not strengthen prejudices against the LGBT+ community and effectively escalate homophobic violence—Paulina Pająk explains—I say no to discriminating resolutions, because as a lesbian and citizen I want equal rights for LGBT+ people: marriage equality, a dignified transition procedure and protection from homophobic violence. For those who emigrated, for those who didn’t get to experience equality, and for those who will come after us.

A 165.000 zł. fine for fighting against homophobia

The first hearing of the Atlas of Hate trials will take place in Ostrołęka on July 20th, with the plaintiff being the Przasnysz district. The next hearing will take place on July 29th in Nowy Sącz, with the Tatry district being the plaintiff. Both hearings will take place online. In addition to this, the Atlas is awaiting trial dates in district courts in cases of Opoczno county (in Piotrków Trybunalski court), Przysucha county Radom court), Tarnów county (Tarnów court) and Gromadka (Jelenia Góra court). The local officials, represented by fundamentalists from Ordo Iuris, claim that they were slandered by Kuba, Kamil, Paulina and Paweł bringing light to their resolutions. The officials are demanding apologies published on www.atlasnienawisci.pl, reading the apology on the steps of the European Parliament in Brussels, reading the apology at a Polish Press Agency conference room rented by the activists and 20 thousand PLN for each of them five local organizations. The total cost of the demands, with 100,000 PLN going to social organizations, also includes 40,000 PLN for a 5-person trip to Brussels, 25,000 PLN for the Polish Press Agency conference room, for a grand total of 165,000 PLN. These demands are higher than the sum of Kuba, Kamil, Paulina and Paweł’s yearly salary. The Atlas team also expects one more lawsuit from Gromadka county. This will increase the demands to 200,000 PLN.

Despite statements that comparing Poland to Putin and Lukashenka’s regimes is a stretch—you can already lose your life savings to an executor and go into many years of debt for simply highlighting homophobic policies. All this money going towards the budget of a country that has the freedom of speech and anti-discrimination in political life enshrined in the constitution—says Kuba Gawron.

Repressions towards LGBTQ+ activists have increased ever since Law and Justice took power. Kuba, Kamil, Paulina and Paweł’s story is an example of the lengths a homophobic government will go to to silence those who stand for human rights.

Repressions against us—persons working for human rights are becoming stronger and stronger. With a media witch hunt already happening, the government is using SLAPPs (Strategic Lawsuit Against Public Participation). By forcing us into a lengthy and costly legal defense, public organs aim to scare us into silence. They also do this to warn off other human rights organizations looking to protect, for example, LGBTQ students from the homophobic witch hunt perpatreted by the country — explains Kuba Gawron

The court battle involves harassment. Lawsuits are sent to the activists’ workplaces, to scare Kuba, Kamil, Paulina and Paweł with consequences at work. For example, Kuba had to reveal his court case to his superiors and co-workers who were suspecting him of abusing his workplaces’ postal services.

If it wasn’t for the legal help given to us by the Campaign Against Homophobia and their amazing team of lawyers, it would be impossible to keep working. Even now, I have to pay more attention to 5 out of the 10 announced lawsuits than I do to the Atlas. If it weren’t for legal support, as a person living paycheck to paycheck with a family to feed, I wouldn’t be able to keep working on the Atlas with Kuba, Paulina and Kamil in what I consider the fight for an equal Poland—says Paweł Preneta.

Legal support is coordinated by the Campaign Against Homophobia, Polish Antidiscrimination Society, The Equality Sign Federation and Barabasz Lawfirm. Lawyers involved in the trials themselves include Piotr Jurek, Alicja Szpringer and Mikołaj Świstowski. The entirety of the defence is coordinated by Karolina Gierdal from the Campaign Against Homophobia.

In 2020 so called “anti-LGBT ideology” and Family Rights Charter stopped being adopted. Petitions from local politicians were rejected one by one. What’s more, as an effect of the activities of, among others, the Hate Atlas, local government units started withdrawing legislation. As of today, 7 units withdrew their legislation, including Kraśnik, Nowa Dęba, Nowa Sarzyna and Przemyśl. Despite this, the scale of the event is still enormous. Discriminating legislation is still adopted in 92 local government units, covering 31% of Polish territory. This is why Kuba, Kamil, Paulina and Paweł’s activism is needed so much.

When starting our activities, we expected criticism from conservatives and fundamentalists. After all, our goal is to stop LGBT discrimination in all of Poland. No matter how many times we’re sued, our aim is to continue working. The basic right to safety for the LGBT community, especially in smaller towns is our top priority. No lawsuit will change that, because no lawsuit will help teenagers—declares Kamil Maczuga.

* Please take into account that the names of local governments should be given together with their types.
Without the types they usually refer to towns which have the same name but they are separate local
government units, usually without anti-LGBT resolutions.

* The resolutions adopted by the European Parliament: