A court trial for the Atlas of Hate?! Terrorized LGBT activists from Poland face lawsuit

Kuba, Paulina and Paweł created The Atlas of Hate in which they follow discriminatory resolutions adopted by local governments throughout Poland. The Atlas has already gained recognition all over the world. Now, the authors face a trial for indicating on the map of Poland the municipalities that have adopted the Local Government Charter of the Rights of the Family. Show solidarity with the heroic trio attacked by the radicals associated with Ordo Iuris – join the action “Stand up for Kuba, Paulina and Paweł! #HeroicTrio.”

While others were passively observing the discriminatory actions of local authorities, Kuba, Paulina and Paweł decided to act. Together they created The Atlas of Hate – a map of Poland on which they marked local municipalities that adopted the Local Government Charter of the Rights of the Family. And this brought the attention of the world to what’s happening in Poland. Now they are facing a trial for depicting local governments’ actions. A fundamentalist organisation Ordo Iuris convinced the local authorities to initiate legal proceedings against the heroic trio. During a press conference on Tuesday, 3rd March, it was announced that they are planning to filed the first petition for infringement of personal rights to the court. 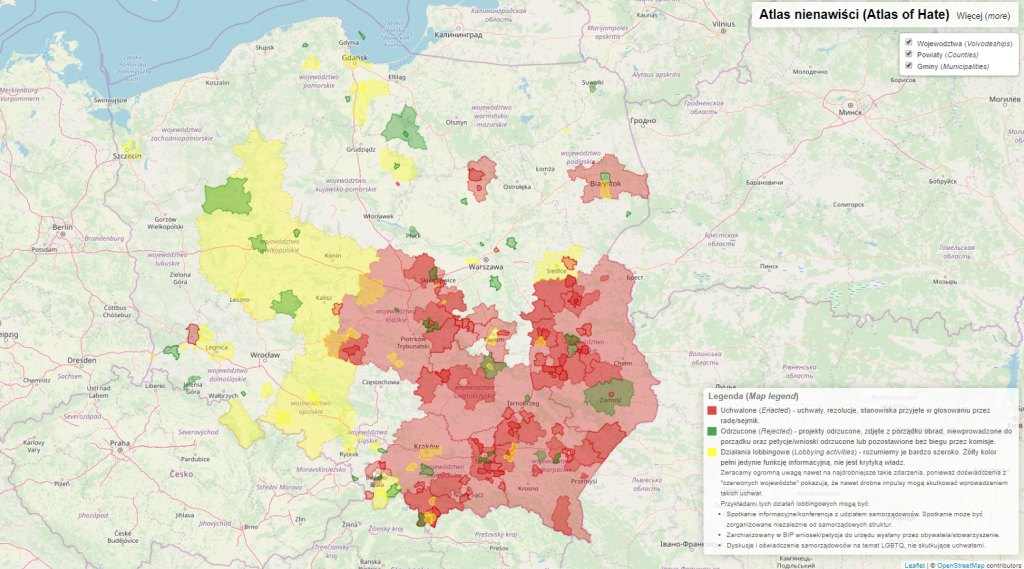 We won’t let them terrorize us

Kuba, Paulina and Paweł are those who the enemies of equality want to silence. Threatening with a lawsuit is nothing less than an attempt to censor the actions of human rights activists.

We are not afraid! We will continue our work in order to spread the truth about the discriminatory resolutions adopted by the local governments all over Poland – say Paulina Pająk, Kuba Gawron and Paweł Preneta.

The authors of The Atlas of Hate are not alone – legal support for Kuba, Paulina and Paweł is provided by the Legal Team of the Campaign Against Homophobia (KPH).

Warnings about possible lawsuits had been made before and, as the KPH Legal Team we are not surprised with the yesterday’s announcement. We are ready to take action and convince the Court that this is certainly not a case of defamation of local governments and the Local Government Charters of the Rights of the Family fully deserve to appear in the Atlas – says advocate Karolina Gierdal, the coordinator of the KPH Legal Team.

Stand by the heroic trio!