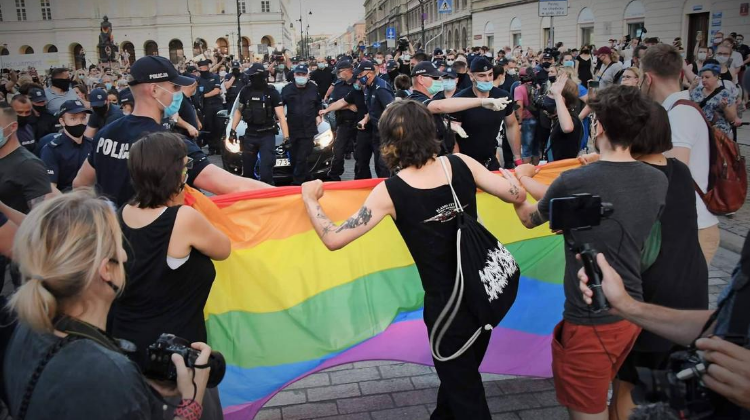 Polish Stonewall? Campaign Against Homophobia statement on protests against the politicized arrest of an LGBT activist and brutal police repression

Yesterday’s events in the capital of Poland will forever be remembered by the Polish LGBTQIA movement. Shocking images of police abuse will always stay in our memory. The sense of pride, power and solidarity that we experienced during yesterday’s riots will remain in our hearts. Cannons have been launched against the rainbow and there is no turning back.

Yesterday, Friday, August 7, the court issued an outragous verdict: it concurred with the prosecution’s appeal and ordered pre-trial detention for Margot, an activist of the queer Stop Nonsense [Stop Bzdurom] collective, for two months on charges of assaulting and destroying a homophobic van – the same van that for months has been screaming in our face with impunity that we are pedophiles. She did what most of us wanted but were afraid to do – she started to defend herself on her own, because the state and the authorities stopped protecting us.

This time, Margot did not want to be handcuffed in a dark alley or dragged out of her apartment – she was at the headquarters of the Campaign Against Homophobia [KPH] in the Warsaw neighborhood of Solec, waiting for the police to arrive. A spontaneous solidarity demonstration gathered in front of the building: activists, members of The Left [Lewica] and the Polish Green Party [Partia Zieloni], and the national media were present. They chanted: „you will not lock us all up” and „stop political repression”.

Around 6.30 pm Margot left the KPH office and wanted to voluntarily turn herself over to the police, stretched out her hands to be handcuffed, but … the police said that they did not see any reason for her arrest. The officers refused to arrest her. We have no doubt that it was just a stall tactic.

The crowd moved to Krakowskie Przedmieście street. At the statue of Christ the King, Margot said goodbye to everyone. Then the attack ensued: the police officers caught her and put her in an unmarked police car surrounded by other officers. A blockade began – people sat around, chanted slogans of solidarity, more and more rainbow flags appeared which were later brutally pulled out of our hands.

The police were aggressively pushing the protesters out of the way, knocking people to the ground and holding them down with their boots. Our path was cut off on both sides and a roundup of random people from the crowd began. We stayed there and took care of each other, none of us were left alone.

The detained persons were transported to the police stations; there was no information who had been detained or where. The immunity of the MPs and opposition deputies, who accompanied us from the very first moments and protected us with their own bodies, was ignored. The detained persons had no contact with their families; no legal representatives or deputies were allowed. The rights of defense were violated at every stage. People were questioned without the participation of defense counsel. We were denied the right to information. It was only the deputy Magdalena Biejat’s (The Left) blockade of the police car late at night that forced the police to disclose where some of those arrested at the police station on Zakroczymska street had been transported. Until now, we are not sure where most of us are. The police are lying and hiding information.

Earlier, an ostentatious roundup was organized at the police station on Wilcza street, where the rainbow solidarity picket had gathered. More and more people were being detained; it looked like it would never end. Now we know that more than 50 people have been detained, the first interrogations are underway. The Ombudsman, Adam Bodnar, and representatives of the National Mechanism for the Prevention of Torture intervened.

What happened yesterday is not normal and it is a clear violation of human rights.

Yesterday’s riots are the result of a two-year campaign against LGBT people in Poland. It is the result of a brazen homophobia of the authorities who did not hesitate to use any means of violence to intimidate us. We have experienced unprecedented abuses by the police and disproportionate means of coercion. We are a target of continuing, escalating violence.

We, the LGBTQIA community in Poland, are fed up with repression, intimidation, and aggression by the Polish authorities and the police.

We are calling upon the state and international authorities to:

2. Call upon the Polish police to immediately release those detained during yesterday’s demonstrations.

3. Call upon  Polish law enforcement agencies to refrain from further repression of demonstrators.

The rainbow flag and LGBT people are now becoming a new symbol of the fight for freedom and democracy. We are ready for the Polish Stonewall: you will not lock us all up.